Over 100 of Mark Henkel's Media Interviews Archived for History


Before there was TLC's "Sisters Wives" in 2010, and before there was HBO's "Big Love" in 2006, there was - and still is - the National Polygamy Advocate ™, Mark Henkel, presenting polygamy to the public since 1994. In March, 2018, the newly developed National Polygamy Advocate ™ PODCAST began the historic work of archiving the audio-recordings of over two decades of Henkel's national media interviews, podcasting one new episode every Wednesday. Now, for the new decade of the 2020s, the podcast aired the 100th archived-interview on February 12, 2020.

That's over 45 hours of listening research.

The archive is available on numerous platforms. To locate the podcast, search for "national polygamy advocate" using most Apple (iTunes) or Android (Google Play) smartphones. Several other platforms carry the podcast too - all of which may be found via http://Anchor.fm/nationalpolygamyadvocate . It is also available on the popular platform, Spotify.

The archive provides interviews with international media: from Agence-France Presse of France to Macleans of Canada, and from the London Daily Mail of England to BackChat of Hong Kong, China.

Newspaper interviews include The San Diego Union-Tribune, The Boston Herald, The Houston Press, The Portland Press Herald, The Poughkeepsie Journal, and many more.

TV interviews, archived on the podcast, are from shows on CourtTV, Al Jazeera America, RT America, HeadLine News, and more.

Other must-mention interviews archived to date also include National Geographic Television, The 700 Club, and Newsweek.

With all these posted past polygamy interviews, this podcast has become the one-of-a-kind source and resource for research, learning polygamy argumentations, and studying history as it is being made.

For the freedom of Unrelated Consenting Adult Polygamy, this milestone has truly made history. With even more episodes yet to come, the National Polygamy Advocate ™ PODCAST archive now contains over 100 media interviews. 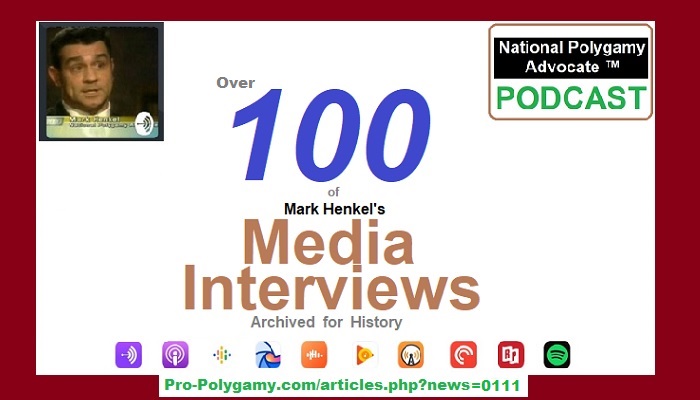 
2020 Feb 23
Over 100 of Mark Henkel's Media Interviews Archived for History
For 2 decades, National Polygamy Advocate ™ Mark Henkel has been giving interviews to national media. The growing archive of his past interviews now has over 100 episodes - a historic milestone.